Was out yesterday for my usual Saturday of searching for a home to live in. I drove over the side from where I am this time, over bayside.

For the first time in my searching I found a place I could live in. It was not flash, more than adequate, though not a lot more, and without any real style – but furnished it was a home I could be comfortable in. There was a yard for Rigby, plenty of space, and even if it was on a main road it was not badly located. I took an application form as I left.

I had hours to kill until my next open for inspection so dropped by JV’s for a while. He was cleaning the cool. Beccy, his fiance, was humungous with child and sharing a cup of tea and cake with a friend of hers. I had a coffee, a chat, then headed off again.

With time still up my sleeve I drove to the end of Bluff Road and mosyed my way to True South, a brewery pub across the road from the beach. I chatted to the barmaid, sampled a couple of beers, had something to nibble on, and read through the weekend papers sitting by the window. Mellow as. Bayside-ites filtered in throughout my time there, affluent and comfortable, kids in tow, the weekend shorts on to catch the rays of the Spring sun.

Off I went again to another OFI. This time, again, the agent failed to show, but I was not as pissed off as I might have been. The house wasn’t right, I knew that without even walking in the door. This one was on a major road and the necessary serenity was not there for H. Cross that one off and off to the next.

The next was in a quiet street not far from the main drag at Hampton: an ideal location. It was the back property of two. I got there and found once more the place all locked up. I rang the bell regardless,

A moment or two later a woman poked her head around the corner. Turns out she lives in the front place and wondered who was ringing the bell. I explained to her the situation and we stood there talking for 5 minutes. She was a very pleasant woman happy to share with me about the house I was hoping to inspect, about the owners, who were dear friends, and about the area in general. By now other people had arrived, and eventually the agent.

This place was more expensive, but also more suitable. I loved the bedroom, which had a WIR (see how I’ve got the acronyms down pat?), as well as an en suite complete with spa bath. There was plenty of space in general, and an outdoor entertaining area. Yes? No? I wondered. It ticked off all of my boxes except for price – but what price happiness?

Walking out I was accosted by the neighbour. What do you think? she asked. We talked for another 5 minutes. It seemed clear she favoured me over the other candidates, and told me she was reporting to her friends about us. She urged me to take it, saying that Rigby wasn’t an issue at all. Maybe, I thought. I liked her, and thought a good neighbour is nothing to be sneezed at (though I’ve been quoted as saying that the best neighbour is one you never see or hear). Cya ’round I told her as I left.

I drove back feeling more buoyant than I have for a while. After finding fuck-all in the last few weeks I see two properties on the one day and they’re both winners. Things seemed more positive, though I’m not about to count my eggs. I wonder, all the same, if things are beginning to shift in general. I have my eye on someone too, and could be a goer. I’m ready

This seems utterly weird to me. I’m looking for a place to live. Pain in the arse it is too. So far, no good, real estate agents difficult, not a lot of options (particularly given Rigby), prices way larger than I expected, and pretty well every joint I look at disappointing.

Every day I scan the online rental classifieds. This is were it gets weird. As it happens, right at this moment, two properties I’ve lived in previously are available and on the market. Over the period we’re talking about – 20 years – I’ve lived in 5 different properties, one of which I owned. So, 40% of the homes I’ve lived in over the last 20 years (excluding a year in Brisbane) happen to be available at the same time I’m looking again. If you exclude the place I owned – it was never on the market – then it jumps to 50%.

Sorry fellas. Unfortunately you no longer fit my needs. Back to the real estate portals.

Last week I received a call from a real estate agent inviting me to an auction today at a house virtually over the back fence. By odd coincidence I had walked by the same house barely 10 minutes earlier while walking Rigby. I had stopped to read the board, and to admire the house, which seemed the best on the street.

This morning I went along to check it out properly. Walking in I was amazed at how many Asians there were inspecting the property. The next suburb over is Box Hill, which is very much an Asian enclave. Walking through the mall there half of the signs are in Chinese, and about 80% wandering through are Asian. It’s a momentarily strange feeling to be in the ‘burbs of Melbourne and to experience it as foreign. There is still something about it that seems quite Australian – the light perhaps, or perhaps the architecture – and yet it reminds now of China, and Beijing particularly. And so yes, that explains why there were so many Asians examining the property – about 20 of the 25 I saw there – but it still comes as a surprise.

The house itself was beautiful. In many ways it was a conventional, upper middle class home, comfortable without being extraordinary. What lifts homes like this from the ordinary are the lived in quality. You walk in and you sense years of happy family memories, a warm engaging feeling that immediately inclines you to a positive impression. That was present here. It was tidy and beautifully presented, but it was also clear that it was lived in, a guitar in the corner, old paperbacks in the book shelf with their spines cracked, a cookbook lying open, and so on. In my mind at least you conjure up the people who have lived here and now selling, confirmed moments later by a family portrait hanging on the wall.

It was a tastefully, elegantly decorated gome. Beautiful things, neither too few or too many, warm colours, and none of that austere look that has become so common. Lifting it further where decorator items that seemed to have a story behind them – some black and white framed photos of the back streets of some Asian city, perhaps in Vietnam. An antique porcelain bowl,  once more of Asian origin, placed prominently.

I wandered around by myself, deferring to others on the narrow staircase, letting others go before me into the lock-up garage. I was curious as to what it might sell for, but I found more and more my mind moving into another direction.

Once more I felt a kind of existential pang. So this is what you have sacrificed, I thought. It’s not something that had ever occurred to me before. I grew up in a home not dissimilar to this – tasteful, warm, very comfortable. Perhaps it’s the home I thought I would return to as an adult. Instead I’ve gone my own way, deliberately so, and in the process had some great experiences, let alone some stylish pads of my own. Why then did this occur to me now?

I guess I’m in a different state of mind these days. I was conscious as I looked around of a mild sense of regret. You choose one thing at the expense of the other. This is what I had failed to choose, the family home, and all it entails. Was it too late? Of course not. Was it likely? Maybe not.

None of this showed in my face. Amid the crowd there I was the solo visitor, the tall caucasian scrutinising things as if he might myself be a buyer. I was not. I left before the auction. By now it’s somebody else’s home. 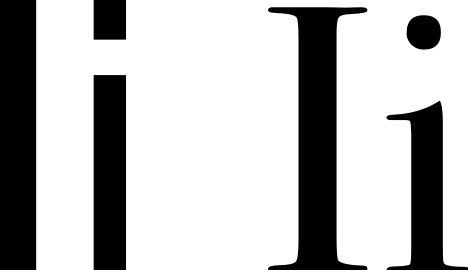 Wikipedia: is the ninth letter and a vowel in the ISO basic Latin alphabet. →